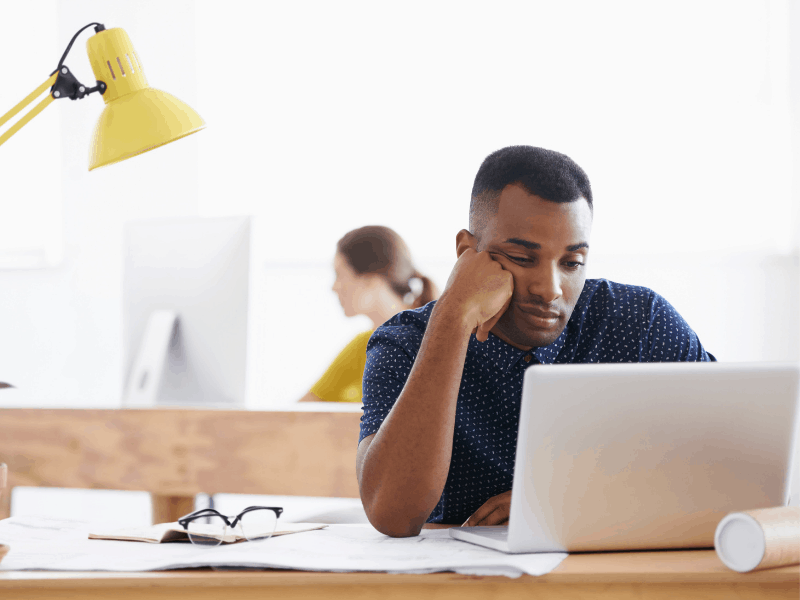 If at some point during the pandemic you also felt a numb sense of joylessness and aimlessness creeping in, you are not alone.

It had been with me for months until I really realized what it was:

In psychology, the term defines the simple absence of well-being. This condition, unlike depression, is rather inconspicuous and often goes unnoticed. The symptoms are often lack of motivation, emotional detachment and lack of concentration.

This was brought to my attention by my partner when she stumbled across this term on the Internet.

Suddenly it made sense that I had felt so strange for a long time. Neither depressed nor content was I. Somehow I was stuck in the neutral middle.

And I was not alone in this.

Several conversations, with friends, family, work colleagues and casual acquaintances have confirmed that this state of mind is widespread.

Of course, the feeling existed before the pandemic, but the increase is frightening - but somehow not surprising:

Languishing has replaced the initial insecurities, fears, and stress from the beginning of the pandemic. Mostly after these feelings burned out and a habit to the circumstances set in (instead of a hoped-for return to normalcy).

By the way, this term appeared in 2002 in the scientific article The Mental Health Continuum: From Languishing to Flourishing in Life. By psychologist/sociologist Corey L. M. Keyes.

These are the most common symptoms that can be observed. It is possible that one or more of them apply to you:

It is possible that you have other sensations that are not listed here, but still leave you in the state of mind described. You are welcome to write to me about your experiences. I would be glad.

Which groups are particularly frequently affected

For this purpose, a study was conducted by ipsos.com were carried out, in which people of different generations were interviewed:

Aside from the fact that life is less than fulfilling when mental well-being is lacking, the condition of Languishing, according to this study an initial situation which can promote depression and other mental illnesses (e.g. anxiety).

Small heel, but with a lot of weight. This risk should not be underestimated.

What to do about Languishing?

Now that we know Languishing doesn't feel particularly severe, but can certainly bring its problems, you're probably asking yourself how you can approach Languishing to achieve greater well-being.

The most effective method against Languishing is "Flow" - the state of highest concentration and complete immersion in an activity. Suitable activities to achieve this state typically have the following characteristics: Progress, Attention, Meaning.

The three properties mentioned were determined by Adam Grant mentioned in this context and probably require a brief explanation:

Progress: Activities that show progress in some way are often a good way to get into the flow and keep us interested in the long run. As long as the progress is there, it can be in very small steps.

AttentionTo achieve the flow state, it is important to pay attention to the activity. The whole. This is often difficult, especially in our stimulus-flooded environment. Therefore, it is important to create spaces (temporal and physical) free of disturbances. Start with small blocks to get used to it and gradually increase. By the way, the best known variant of this method is called Pomodoro technique known.

MeaningActivities with meaning are particularly suitable, because the feeling of contributing something (in whatever way) makes it easier for us to devote our attention to something. Also, the satisfaction during the activity is usually correspondingly higher. If this component is present in the activity, flow of the highest level can be achieved.

Such an activity (with ideally all three components) gives everyday life a goal again and thus meaning. This, in turn, can have an impact on everyday life as a whole and restore well-being.

For me such an occupation is for example - who would have thought it - writing. Be it on an article or my book: when the dreariness seems to take me again, I keep in mind that in a few hours, I can write again on something - or do it directly, if I have the opportunity.

This focus on what is to come, and then later the actual exercise, quite reliably relieve the feelings of listlessness and listlessness.

I experienced that especially in the first year of the pandemic. At the beginning, there was hardly anything besides work and sleep. Social contacts were reduced to an absolute minimum and for a long time only took place online. The space thus freed up was largely taken up by passivity and resulted in countless hours on Instagram and the like without any real sense or purpose.

But then something happened. I found an activity with meaning. Again and again, I managed to resist the temptation of Instagram, Netflix and Co. on yawningly boring evenings and write more again.

I did not do this intentionally to counteract Languishing, but rather by chance or possibly because my subconscious was looking for something to do. No matter what it was in the end, I am very grateful that I was allowed to have these experiences and still do.

I can observe that it's getting easier and easier for me to get into the flow (but sometimes, to be honest, it doesn't work at all - that's okay, too). In any case, I also feel much more comfortable and relaxed away from writing.

For this I like to take time in the evening, depending on the situation, one or more hours. It requires my attention and allows me to be absorbed in the activity to advance the project at hand. Seeing the blog grow and the prospect that people will read the articles creates fulfillment.

As you can see, all three components are given for the flow.

You may have been surprised for a moment that "flow" was mentioned as the best remedy for Languishing. Now that the background has been explained, it probably makes sense, but chances are you're wondering about another remedy. It may well be that the following first came to mind as an answer:

Optimism. According to Adam Grant (here go to TED Talk) you have the best chance to regain your well-being, not through optimism. Contrary to the frequent social suggestion about psychological stress.

Sentences like "Just look at the positive things" are probably familiar to everyone. However, they are not always helpful. They can even have a negative effect by giving people the expectation that only positive feelings are valid and accepted. In the worst case, this can lead to "toxic positivity". The topic is discussed in this Study but as a short summary we can state that the evaluation of emotions is a risky procedure, since every emotion has its right to exist.

Nevertheless, I think that a certain degree of optimism is helpful in overcoming difficulties. By this, I don't mean a frantic glossing over of unpleasant circumstances, but rather a change of perspective.

For example, I like to keep in mind that through the pandemic and the Languishing I experienced, I was able to get to know my boundaries better, discover passion, and become more aware that many others are also affected by Languishing. If you know someone who describes their state of mind similarly, please feel free to share this article with that person. After all, we're all in the same boat 🙂 .

This article serves as a loose summary of the results of my research as well as my thoughts and experiences with this topic, which is new to me and may affect you as well.

Even though Languishing is not a classic mental health diagnosis, the feelings you experience are valid and real.

Whether it is exactly Languishing that you are going through, I can't answer. But I would like to encourage you to look for a new activity in which you can find meaning. Who knows, you might even rediscover an old hobby.

One more thing: If you are concerned about your mental health, you should consider contacting trained psychologists.