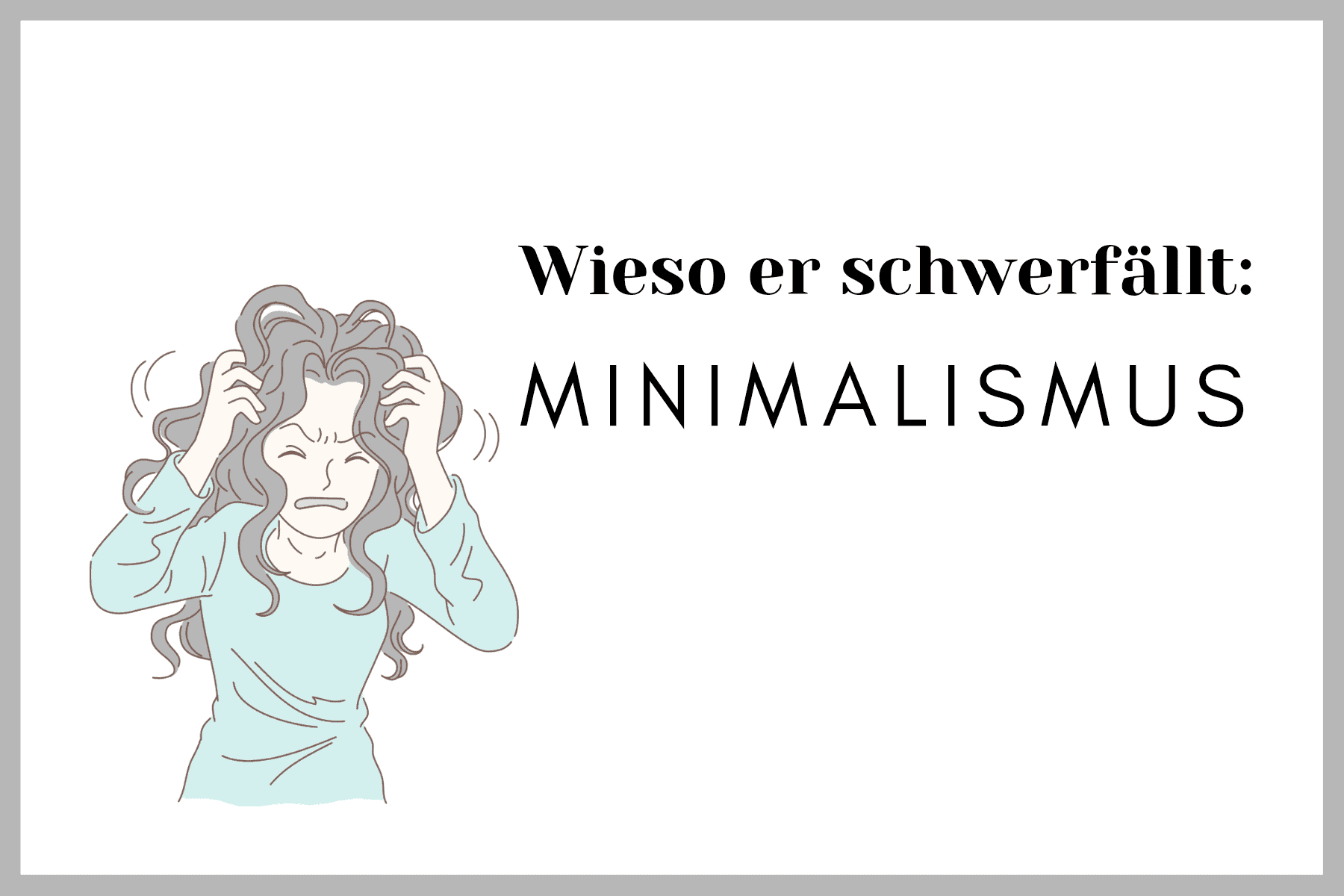 After backpacking through South East Asia for the first time, I realized that you don't really need much to live. On the contrary, it even felt good to have to take care of only a handful of things.

That's why when I got back home, I sorted out many of my possessions. And even now, years later, I don't miss them. But it was not always easy for me.

But why do we often find minimalism difficult?

The biggest difficulty with minimalism is getting started. As we accumulate and identify with various possessions throughout our lives, we often find it difficult to let go of them. and often do not dare to take the first step.

The fact that we identify with things is essentially due to two factors:

The difficulty associated with these two circumstances should not be underestimated.

Another difficulty regarding a minimalist lifestyle, in my experience, is that you have to learn to make do with less, which can involve some habit-shifting - which we know isn't always easy for us. For example, minimalism can mean having to do laundry more often because you might only have seven T-shirts instead of 27.

My personal difficulties with minimalism

As mentioned earlier, we often have an emotional attachment to most of the objects we own.

For example, toys that have been lying around in the attic for years and have long been forgotten. But when you want to sort this out, it is often difficult to throw these things away. If you haven't held an object in your hand for years and then see it again, memories quickly come flooding back as you may have received it as a gift or bought it..

Even if we have not used it for the last ten years, or even partially forgotten that we have it. It is not easy to remain objective and rational in such situations.

What helps me with such decisions is to keep in mind that these items, if I still want to own them, are just lying around in the attic anyway, but if I pass them on, someone else can actually enjoy them.

Whether it's old toys, an old skateboard or old clothes. The thought that someone else has a better use for it, often helps me to let go of the things then.

As I began to sort out my personal possessions, I quickly came to the problem that although I owned little, I also had little storage space for the things I still owned.

Let me put it this way, every table, shelf, cabinet that didn't have an important function was removed from my room.

This gave the items I still had less room to be put away.

This in turn led me to continue sorting out possessions, as I can't stand things just lying around with no fixed place to go.

What do I really need

What has really opened my eyes is my travel lifestyle. Nothing shows you better that with fewer material possessions you can comes clearthan for a while with few material possessions. to get along. When you're living out of a trunk for two months, or a backpack for four months, you quickly notice that most of the stuff you have driving around your home is nice to have, but not essential.

As long as I have enough to wear, a full belly, and a refreshing shower every now and then, the biggest of my actual needs are covered. Of course it is beautiful if you do not have to wash frequently, however, it is also not a real hassle to do so.

How much you need to live, everyone has to figure out with himself and is for everyone individually to approach. What has helped me to find out what I really need is to start sorting out with items that I have not used for a long time. Since these items have not been used for a long time, I can say with high probability that I will not need them in the future.
The more I sorted out and the less I owned the easier it was to let go of more stuff.

Once you know what you need to be satisfied for yourself, it also helps us sort out what we don't need.

Since it is in the nature that things, which are not taken care of, tend to chaos. This is not a personal opinion, but is already written down in the second theorem of thermodynamics. However, it can also be observed in everyday situations.

For example, if you do not actively put energy into tidying up your apartment, sooner or later it will become more chaotic.

If we do not regularly cut the hedges and shrubs in the garden, it becomes wilder.

If we do not shave regularly, our appearance also becomes messier. But this is not meant to be judgmental because I myself have long hair and a beard.

So if everything tends to become more chaotic, it is also easy to conclude that the more things we own, the more things need our attention to maintain some degree of order.

In other words, the less we own, the less effort, or energy, we have to invest in maintaining order and have that energy, in more important events for us to invest in.

In this context, the energy saved can also be seen as time. Since it, the order in all these things to maintain, of course, also takes a lot of time.

For me, just the aspect of having more time available is worth most of the difficulties of minimalism. Because time is a linearly decreasing constant in our lives, possessions are not.