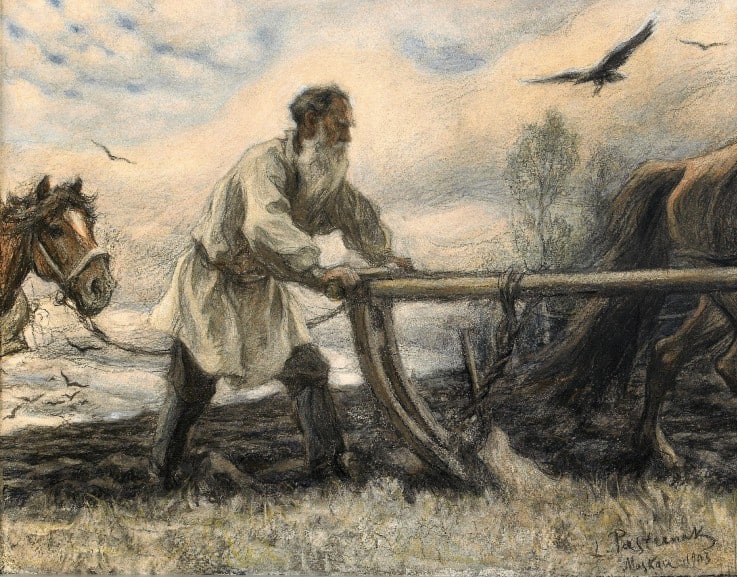 History has produced quite a few great thinkers. A special spirit of modernity was Leo Tolstoy, who also dealt with this subject:

We will discuss less of the what (that is, the meaning of the quote) in this article, since it is relatively clear how the quote should be understood:

Tolstoy criticizes with these words that man is bent on having a changing influence on the environment, but ignores that perhaps he should also change himself.

So we will rather deal with the why. But we will also look at how you can greatly improve your life based on this quote and what "tools" there are for this.

Why we often want to change the world, but not ourselves

Luke and I have often mentioned in our articles that we in the West (and through globalization now in other large parts of the world) have a tendency to devote our energy to outward-oriented goals, but not enough to inward-oriented ones.

This can cause various problems.

But before we look at that, we should briefly look at what the difference is. You'll probably realize a few things by then.

Intrinsic and extrinsic motivation and goals

Let's imagine you've started a small business alongside your job. It's a project your heart beats for and you are willing to work hard for it. Now you have the choice to set two types of goals and use them as motivation. Here is an example of each:

2. you will invest 4 hours of work in your project every day for the next 3 months and you will educate yourself in this field in your remaining free time

In the first case, the goal is oriented outward and in the second inward. And it is the same with the dependence, for the respective achievement of the goal.

In the first variant, you are dependent on external factors:

The second variant, on the other hand, looks quite different:

You understand what I am getting at, I suppose. It's fatal to make your goals dependent on external circumstances, because you can't influence them enough.

Problems of extrinsic motivators and goals

If your goal depends on external factors, you have chosen a setup in which you cannot influence whether something succeeds or fails.

This is extremely risky because there are an unlimited number of influences to consider.

So it might be irrelevant in this case how hard you work. Don't get me wrong. The chances will be significantly higher if you put in a lot of effort, but it could still happen that you don't reach your goal.

For example, your business may be doing well, but because of the onset of a recession, your sales goal is not being met. Customers would like to buy because you've done a phenomenal job, but they simply don't have the funds.

So your goal is not achieved, although you have done great things. And that will make you dissatisfied. In the worst case, you will even give up your job in frustration.

Lack of thematization of psychological and philosophical goals.

One way of explaining why our ambitions are often for the world, but not for our self, is the following:

The mere fact that targets you hear about are, in almost all cases, intent on changing or achieving something in the environment. Why? Well, this often leads to the assumption that extrinsic goals are the important kind to pursue.

The development of personality, finding and understanding true satisfaction or even the search for a meaning in life are often not sufficiently appreciated in society.

Recognition is usually given for visible achievements. Be it something materialistic or also something more abstract, like fame.

Achievements on the intellectual level receive recognition much less frequently. Educational qualifications are usually the only exception.

But when it comes to having gained more confidence, or a higher appreciation for life?

The whole thing is a problem of the shaping of our senses. Our society suffers increasingly from a stunted social sense. I will not try to find the origin at this point and leave it at the simple realization of the problem.

An example of this, is the following fictional conversation, which I am very sure you will find realistic. Perhaps you have already had a similar conversation:

You meet a friend. You haven't seen each other for a while. You're both in a hurry, but you both want to take the time for a quick small talk. After the usual "How are you?" comes the "What are you up to?":

Friend:in "Oh, I started a new job the other day. Pretty good salary. And with the prospect of promotion if my clients' sales stay good. How about you?"

You: "I've been working very hard on my contentment and how I perceive life since last year."

You look at an irritated face.

Friend:in "Professionally, I meant. Do you have a well-paying job?"

You sigh briefly and briefly give information about your profession and then you say goodbye.

It is a downright lack of understanding that we encounter when we communicate such intentions. And this is exactly the problem mentioned, our senses are trained for such things very unfavorably. We are so strongly conditioned to influence our environment that we neglect to pay attention to our mind.

But it is actually not surprising that this is the case. After all, you usually never learned why you should work on yourself (let alone how to work on yourself) at school, in your family, or in any other environment - at least that's how it was for me.

In most cases, intrinic goals result in external things being achieved: if you put enough time into your project, you will be able to make sales.

Another exciting approach in this regard was brought to my attention by Luke. The psychologist and speaker Jordan B. Peterson points out again and again that it is often easier for us humans to undertake to improve the world, but not even manage to clean up our own apartment. The reason he gives is that we easily accept any failures due to such a large and noble goal - after all, others have already failed at this goal.

And it also gets you off the hook if you can't get your own life together. Free of the motto "Yes, my life is disorganized, but at least I'm trying to defeat world hunger by protesting in the streets.

So if you recognize such circumstances, you should take action and adjust your priorities. Unfortunately, it's not that easy. This is because we lack the right tools, because in most cases we have never learned to want to change ourselves - let alone how to change ourselves.

Learn to want to change yourself

It's extremely relevant and profitable for you to want to change not only the world, but yourself. And also very satisfying.

It won't always be easy, of course, but it's worth it. And fun.

If you feel a certain rejection at the thought of changing yourself, then this is normal and something that has always accompanied us humans. Already the great Chinese sage, Lao Tzu, has therefore taken up this circumstance in his teachings. Luke has a Article about one of his quotes that can help you realize your potential.

Also, one point that keeps us from wanting to change ourselves (as explained earlier) is the fact that working on one's personality usually receives little to no interest in society.

A good way to counteract this is to surround yourself with like-minded people. There's a quote from well-known motivational speaker and author Jim Rohn that says we are the intersection of the five people we surround ourselves with the most.

If you've ever had a bad patch because you were out with "the wrong people" or know someone who has, you know how much truth there is in that statement.

Therefore, Lukas and I would like to encourage you to get in touch with people who like to work on themselves. It will motivate you and give you the appropriate support to keep at it. You will also motivate others to do the same.

For example, you are welcome to stay in touch with us.

Help to change the social paradigm and thus also ourselves, so that we start to pay more attention to our inner self.

How you change yourself

We look at how you can change in many articles on this blog. It's not easy most of the time, but it's simple in and of itself.

Here are some short but valuable lessons that can help you become your best self: