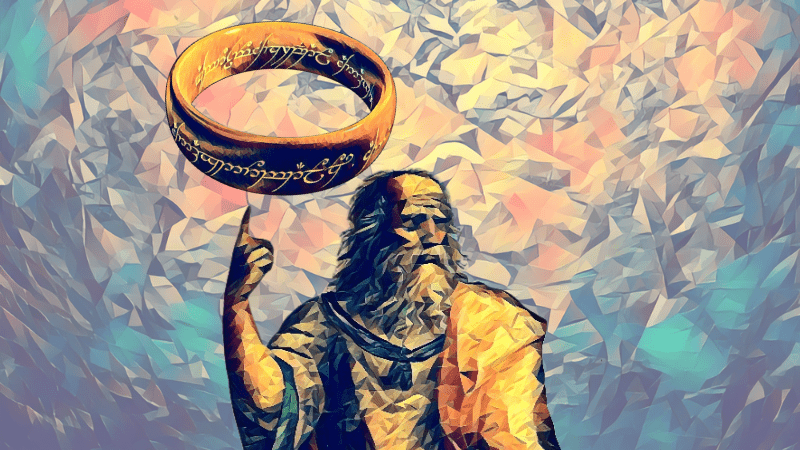 Tolkien's fantasy universe around the Ring of Power has been getting a lot of attention since the Amazon series "Rings of Power", but what few people know is that there was already a tale about an invisible magic ring in ancient times.

So: what is this narrative and where does it come from?

It comes from Plato. Yes, THE Plato, the legendary philosopher who also reported about Atlantis.

Plato's narrative serves as a metaphor for understanding the motivations for which people are just. Is it because we have an inner sense of justice or is it simply the fact that justice is highly regarded in our society?

Here is the summary of the Ring of Gyges

The story is about a shepherd who finds the grave of a giant. In the grave he finds a ring, which he takes with him. In the evening when he sits again together with the other shepherds at the fire, he plays with the ring and suddenly becomes invisible when he turned a set stone. When he realized the power this ring gave him, it wasn't long before he sneaked into the royal palace. Once there, he seduced the queen and persuaded her to betray her husband. The story ends with the former shepherd becoming the new king.

Glaucon, the brother of Plato, told this story to Socrates to support his point that man is only just because it is expected by society. However, once one has the ability to act on all of one's dark desires without consequence, the true face of man is revealed. Man may not even do this out of malice, but merely to gain personal advantage.

To support his argument, he divides all desirable things into three classes:

The first class are things we desire for their own sake. Examples would be food, drink, or other harmless pleasures.

The second class are things that we desire because they bring a certain status. Everything that gives prestige falls into this category, for example, athleticism or knowledge of medicine.

The third class is a mixture of the first two. They are things we desire because of themselves and the added value they bring, such as knowledge and health.

Glaucon says that justice belongs to the second class. This is because it is a burden, but one that brings prestige. The only reason people see themselves as virtuous is because of external influences. So it's more about looking virtuous than actually being virtuous.

Socrates disagrees. He says that justice belongs to the third class, since there are external as well as internal benefits from acting justly.

Socrates now argues against Glaucon. He claims that the human soul consists of three parts. Mind, Spirit and Desire. The mind leads the individual to truth and knowledge. Here, the mind is influenced either by the spirit or by desire. The mind is righteous, ambitious, and the source of righteous action. Desire, on the other hand, consists of more basic physical needs.

For Socrates, a philosopher should be guided by reason and the mind should keep desire in check. Only in this way could one act justly and happily. Even if there were no consequences for evil actions, as in the saga of the Ring of Gyges, a good person would not act that way. The tyrant, in this case the shepherd from the story, succumbs to his desire and acts unjustly. Even though the shepherd has his desires fulfilled, his soul is still in an imbalance. Thus, he is a slave to his own basic physical needs. This would not be the case if he had been guided by his mind.

From this very reasoning, it is clear that although the shepherd got everything he desired, he still would not be happy even as a ruler.

What is your opinion on this subject? Do you think we as human beings are just only because we are not able to be invisible. Because society tells us that acting justly is a good thing? Would you be happy as a king if you ascended the throne in such an immoral way?